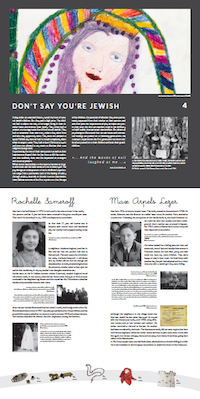 The conditions under which children survived the Shoah varied greatly. Many of them were hidden in Christian families and had to hide their Jewishness at all costs. Some of them were able to rely on affectionate, caring strangers but others had to pay their helpers dearly or were taken advantage of and used as workers. Some of them at least had a roof over their heads but others literally went underground, into caves or hiding places they made themselves. Ruth Fridlendere and her mother lived in an earth bunker in Latvia for almost four years.

Avoiding the murderous fate that the Nazis and their collaborators intended for the children depended on numerous coincidences and strangers. Children like Fred Lessing from the Netherlands, who was 6 years old at the time, spent the war hiding in half a dozen different places. The children soon learned that inconspicuous behaviour could save their lives — not to attract attention at all costs.

Showing their feelings, by crying or sobbing at the wrong time could be fatal. The children had witnessed with their own eyes many indiscriminate and brutal events. Or they were indirect witnesses of violence, like Roman Halter who was 13 years old when his father, in tears, read out a letter describing his older brother’s brutal execution. The abnormality of their surroundings was normal for these children — and living in fear a permanent condition.