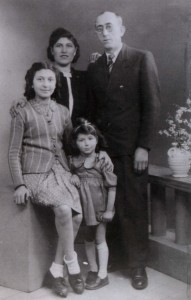 Was born Rachel Kokotet in 1931 in Paris and is the sole survivor in her family. Her parents and her 4-year old sister were arrested in the great roundup of Jews (The Vel d’Hiv Roundup) in July 1942 and deported to Auschwitz. At that time 11 year old Rachel was in hospital with scarlet fever and wondered why her mother had stopped coming to see her.

A neighbour, Madame Registel, took her in. She told her that her parents had fled to Switzerland. The well-meant lie still affects her today. Rochelle Sameroff: »I still dream that my mother did not love me enough and abandoned me. In reality Madame Registel was the person my mother asked to look after me and on that terrible day in July my mother’s last thoughts centred on me.« Rachel went to the St Hélène convent school. Eventually Madam Registel found the Voinot family in the country who hid her there under the eyes of the Germans stationed in the neighbouring houses and thus saved her life. The Voinots called her Renée and pretended she was their niece. 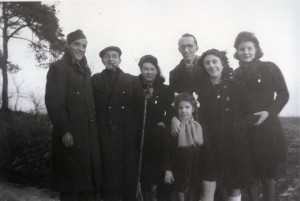 »I loved the time spent in Avrolles and being still so young did not realize the danger all around me. I had friends, went to school, played, climbed the cherry trees in the orchard, did chores and felt very close to Jeanette and Roger and Nicole. I knew that I couldn’t tell anyone that I was Jewish or my real name for everyone in the village called me Renée.«

After the war Rachel discovered that her father’s family had immigrated to the USA. She followed them in March 1947. Decades passed before her three children and five grandchildren persuaded her to travel to Israel in summer 2010 and to bear witness. Yad Vashem awarded the Voinots the title »Righteous among the Nations« 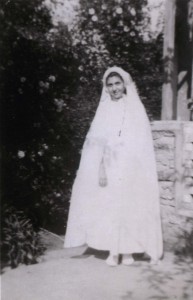 »During the war many people who lived in the city sent their children to live in the catholic schools in the countryside. I wanted to please Madame Registel and when I was asked by her if I wanted to become a Catholic, I said yes. I still have a picture of myself in a white first Holy Communion dress. I was given the baptismal name of Mary Helene.«

Photo 3: 11 year old Rachel at her first communion at the St Hélène convent, photo taken in May 1943, © Yad Vashem.