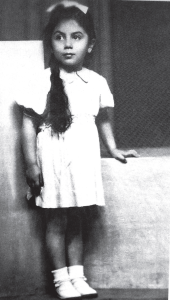 Was born Stella Kugelmann in 1939 to a Spanish-Belgium family in Antwerp, Belgium.

In December 1943 the Germans arrested her parents who had both joined the Belgian resistance movement. Her father was deported to Buchenwald, her mother and 4 year old Stella to Ravensbrück. When her mother died various women acted as »camp mothers« to save her. They hid the child mostly in the barracks full of people suffering from typhoid fever or tuberculosis which the SS avoided. Stella still remembers the ever present agonizing hunger as the thing she suffered from most.

One of the Russian camp mothers accompanied Stella on what is known as the death march and took her and another child as far as Brjansk in Russia. Their the rescuer left the two girls in one of the 40 children’s homes there and continued on in search of her own son. During a New Year’s celebration in 1947, seeing burning timber, Stella suddenly realized that her mother had burned to death. She hardly recovered from the severe shock. 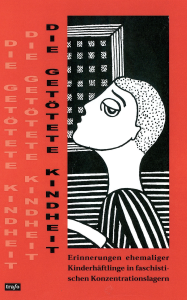 In December 1962 she learned that her father had survived. When they met in São Paulo in Brazil they had to speak German, the only language they both could speak passably at that time. Since the end of the 1980s Stella Nikiforowa has been one of the significant activists in the fight for recognition of the former child prisoners.

»For many years we were not considered reliable.That means that we were second class citizens although we had done nothing to harm our country. All we had to show was our devastated childhood. […] Then, the day we will never forget arrived. On 22 June 1988 […] for the first time in the many years after the war we heard honest words of truth, compassion and of the debt owed to the former child prisoners. […] That was the beginning of a new era in the lives of the child prisoners«.