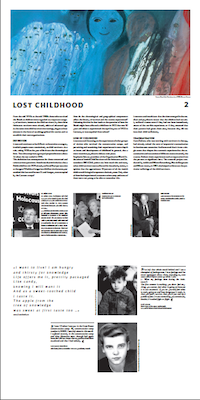 Quote: “I had no real childhood. As a child, I had to be an adult. It was dangerous to be a child. I had to hide the child within me and pretend to be someone else. Therefore, the child inside me is still yearning to be acknowledged and taken care of. But people find it strange to meet an old woman who is really only a child, and I am careful not to disclose this secret of mine. But when I’m around children, they feel it immediately.”

From the mid 1970s to the mid 1980s those who survived the Shoah as children were regarded as a separate category of survivors, known as the child survivors; by then these Holocaust survivors were already adults of advanced age. At the same time child survivors increasingly began to bear witness in the form of autobiographical life stories and to establish their own organizations.