The exhibition is project of the Claims Conference and was realized by the “Agency for Historical, Civic and Media Education” in cooperation with the “Pedagogical center of the Fritz Bauer Institute” and Centrum Judaicum. The panels were exhibited for the first time in Berlin, Centrum Judaicum, in August 2014 during the 26th Conference of the World Federation of Jewish Child Survivors, their first gathering in Germany. The exhibition consists of ten exhibition panels, a printed brochure and this website. 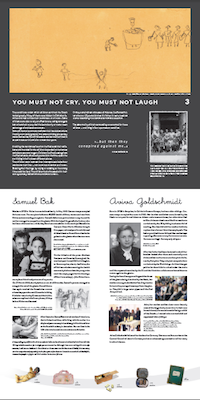 The different circumstances of persecution, which are separately displayed in the exhibition, often overlapped. For example, surviving in hiding meant using a false name. It was unusual to be able to survive in a single hiding place; the impact caused by persecution and the threat of being denounced made it necessary for example to alternate between hiding and the ghetto or false identity.

Survival was also always a matter of pure luck. »I thank my life to a succession of merciful coincidences«, is what György Konrád, born 1933, says, speaking for others, in his autobiographically based novel «Glück« (Luck). That also applies to those who survived the concentration camps and to the children who were able to reach a precarious safety through rescue actions such as the now well-known children’s transports.

One thing appears certain: no matter where, in what conditions and irrespective of how they behaved, it was only possible for children to survive with the help of other people. Now, unlike then, we are becoming aware of the individual »silent heroines and heroes«. Their commitment automatically raises the question of all that might have been possible but was not done. 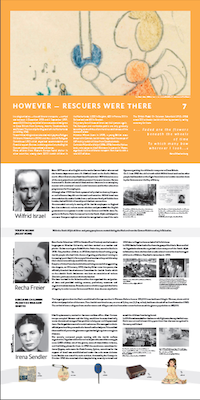 Continuing struggle to survive the survival

Many child survivors lived a long life, with ups and downs, determined by personal and family achievements, by setbacks and loneliness and by the fact that their history was suppressed, individually or socially. Often child survivors did not notice the effects of the shades of the past until their old age: this goes hand in hand with recent academic investigation of the trauma suffered.

The trauma can bring in its wake different needs as well as requirements and assistance of a social and psychological nature; or it can result in self organization where as active people the child survivors make their fate known to the public. This exhibition also wants to contribute to this.