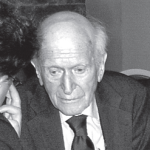 Hans Keilson, who was working with survivors in therapy, had already coined the term of sequential traumatisation in the nineteen-seventies. He discovered that it is not a single event that shapes the traumatic experience but the accumulation and succession of different events intensify the trauma. Keilson views experiences such as separation from the parents as significant here. The research project conducted by Judith and Milton Kestenberg, Martin Bergmann and Milton Jucovy in 1981 also helped to illustrate the particular sufferings of the child survivors. (Photo © Moses Mendelssohn Zentrum – Potsdam)

Experiencing the loss of their own parents as well as their helplessness shaped their further lives as did the realization that suddenly their own life depended on strangers and external powers. When social relationships to the nearest become so fragile and uncertain the basic sense of trust is destroyed. The psychological consequences of such childhood experiences range from a permanent lack of the feeling of safety through anxiety neurosis to chronic reactive depression. But above all psychologists discovered that certain issues and unresolved feelings are passed on to following generations: the traumatic experiences the first generation survivors suffered are passed on to their children and even their grandchildren.

Studies showed that many physical diseases are consequence of the suffering during the childhood.