Was born 1936 as Marcus Arpels Lezer. The family moved to Amsterdam in 1938. His father, Solomon, was the director of a ladies’ wear store, his mother, Flora, worked as a manicurist. Following the occupation of the Netherlands by the Nazis Solomon Lezer used the alias Van Leuwen and went under ground. Max’s mother was arrested in September 1942, taken to Westerbork transit camp and then deported to Auschwitz. 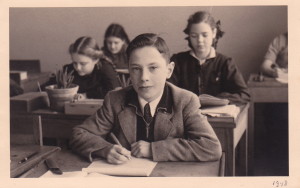 His father looked for a hiding place for Max and eventually found Ype and Boukje Wetterauw in Friesland, whose son had died young and who could not have any more children. They were happy to take in Max Lezer. He lived there with another boy the pair had adopted and for a short time also with a Jewish girl they were hiding. 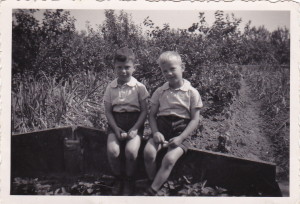 »In the village Dolfie’s father was known as a collaborator. With 6 of my friends we decided to walk to the sea side. When Dolfie spotted us, he called us over to his home. Suddenly a man appeared in the opening of the door, wearing a black uniform. Coming closer we saw Dolfie’s father wearing a Nazi uniform. He walked over to us, came up tome and looked me over. Than he pointed with his finger to me and shouted ›I know you are a Jew-boy‹ placing his finger in the middle of my chest with force, not one time but every time he shouted ›I know you are a Jew-boy‹. I was so scared and fell backwards on back. This big man hovering over me, again saying ›I know you are a Jew-boy‹. As all boys in the village I was wearing a blue overall. Slowly the overall colored dark blue between my legs. From fear I had pissed in my pants. That is the most frightening moment; I was 7 years old.« 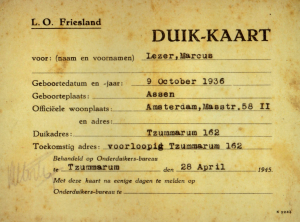 Although the neighbours in the village knew that Max was Jewish he was never betrayed. He stayed with the Wetterauw family until 1948, using different names such as Van Leuwen and Lenders. His father returned at the end of the war, his mother had been murdered by the Nazis. The Wetterauw family did not want to give Max back until he was eighteen. When his father remarried Max Arpels Lezer went to live with him again. But he was unhappy there and ran away from home three times, going back twice to the Wetterauws.

In 1961 Max Arpels Lezer married Sofia Noek, who had also survived in hiding as a child. He is the President of the European Association of Jewish Survivors of the Holocaust.